On this page you will find details about our Spring Outdoor Program. As a club we are continuing to work behind the scenes to book facilities, make schedule modifications where necessary and put the coaches and programs in place. This is still a year of unknowns and we are doing our best to find the balance in programming. Building consistent programming is our objective for the players and families. What we have laid out below will give you an overview of the direction that the Club is going in an attempt to build a Club environment that is inclusive and developmentally appropriate. If there are questions please feel free to reach out to Travis at wms@sportyukon.com.

We have created options for the u9-u13 age groups which give players the ability to not only play in the House outdoor program of a Development Night and a Game Night, but also the opportunity to play in an academy and/or in travel teams (u10-u13) depending on their desire and situation. As we move through the spring we will look at the readiness of these groups for competitions and travel (and of course the possibility considering health orders and family comfort).

These practices will be led by one of the Club’s Development Team and includes both low organization games (75%) and small 1v1 or 2v2 in the last 25% of a practice. They focus on fundamental movement skills, enjoyment, cooperation and the development of a connection with the game through the relationship with the child’s Partner.

This program is designed to include a child with a parent/guardian or sibling. Both are on the field together. The first teammate that the player has will be this individual within the Active Start Partner Program. There is great value in these shared soccer experiences and with Partners on the field with the player we find that there is more time on-task as instructions are shared by the more senior Partner. This structure allows all activities including 1v1 at the end of practice to be with a person the child trusts. This trust is critical at the beginning of the program and assists with the child’s desire to return. There is nothing better for a child than to share this experience with someone who cares for them.

From 0-5 years, boys and girls need to be engaged in daily active play. Through play and movement, they develop the fundamental movement skills and learn how to link them together. At this stage, developmentally appropriate activities will help participants feel competent and comfortable participating in a variety of fun and challenging activities and games. — CANADA SPORT FOR LIFE

Players will be separated into coed teams for practice and games.

These practices will be split between low organization games and skill development (50%) and 3v3 or 4v4 games in the second half of a practice.

Teams will practice on a field, then at the half-way point, they will divide into two small teams and play games with the team from their neighboring field.

In the FUNdamentals stage, participants develop fundamental movement skills in structured and unstructured environments for play.  The focus is on providing fun, inclusive, multisport, and developmentally appropriate sport and physical activity. These experiences will result in the participant developing a wide range of movement skill along with the confidence and desire to participate.  — CANADA SPORT FOR LIFE

Designed for all players U9-U13 within the club. This format allows the Club to create teams of similar compositions (even teams) and quality competition (games) locally. These teams are much like what the children would pick if they were starting up a game of soccer, basketball or hockey by themselves. The Club will create teams that provide a fun environment with the appropriate challenges. Practices will be run by team coaches and the Club’s ‘Development Team’. The practices consist of 50% learning activities (which include small-sided games) combined with 50% game opportunities. This is a key balance for player and coach development.

During the outdoor season there will be two evenings of soccer:

All players taking part in this program are able to:

Once a wide range of fundamental movement skills have been acquired, participants progress into the Learn to Train stage leading to understanding basic rules, tactics, and strategy in games and refinement of sport specific skills. There are opportunities to participate in multiple sports with competitions focused on skill development and retention.  Games and activities are inclusive, fun, and skill based. At the end of the Learn to Train stage, participants grow (or progress) towards sport excellence in the Train to Train stage or being Active for Life, either by being Competitive for Life or Fit for Life. — CANADA SPORT FOR LIFE

Open/Inclusive Academy for SUPPLEMENTAL training. Training in the Northern Lights Academy will occur on Sunday late afternoon 1 x / week from the beginning of May until the end of June.

This program is for players with the motivation to improve their technical and tactical abilities while they practice within a development environment with like-minded players. It is additional training after the  base package (House) of Learn to Train Stage (see above).

Training: 1 x per week in three phases throughout the year => November-March, May-June and August-October.

Travel: One tournament with other WUFC club teams. Potential for one further travel tournament. All under the guidelines from the health authority.

Players within this May-June (6 weeks) program will have:

These teams are selected from the pool of players to travel to tournaments and competitions outside of the territory. For 2021 the Club is attempting to create two teams on the boys side for tournament play and National Club Championships over Thanksgiving (U15 and u17 age groups are determined by Canadian Soccer Association). It is the Club’s goal to have two teams preparing for National Club Championships which is the premier tournament for clubs in Canada. At present the U17 tournament is scheduled to be in Montreal, Quebec and the U15 tournament in Ottawa, Ontario. The Club will not send a girls team in 2021, instead we will plan appropriate development opportunities with the goal to send team(s) in 2022 and beyond.

Travel teams also have the ability to attend tournaments outside of the territory and within these tournaments there is more flexibility in player placement (players playing in different age groups).

Travel Representative Teams within this May-June (6 weeks) Phase One will have:

Phase Two will begin in late July/early August and continue through Thanksgiving.

* Considering territory and provincial health guidelines, we would like to attend two club-wide tournaments for the Travel teams. This will be discussed and decided upon as club coaches as we move through spring and summer. Further travel as desired by the groups and in consultation with the WUFC Technical Director. 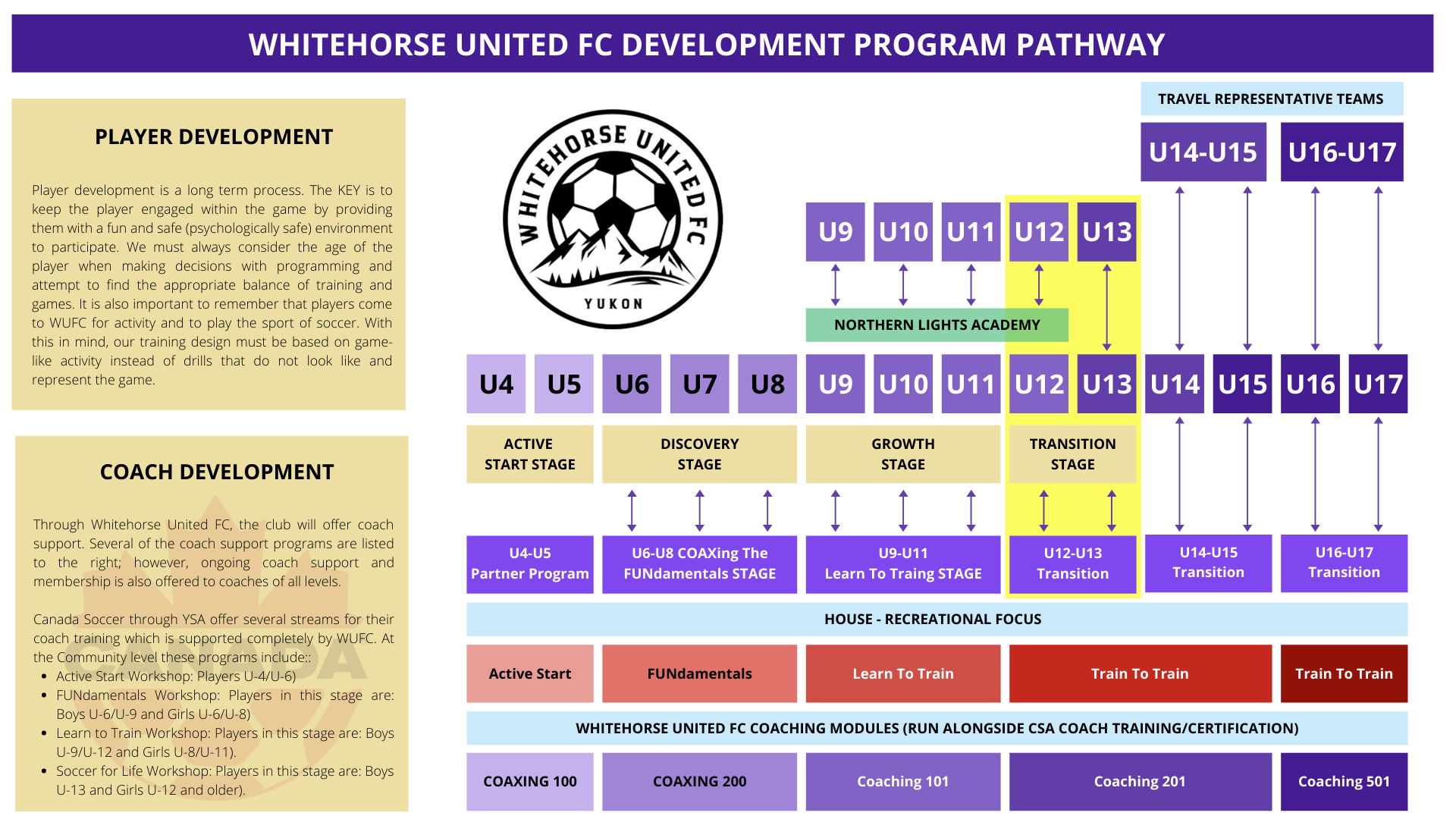 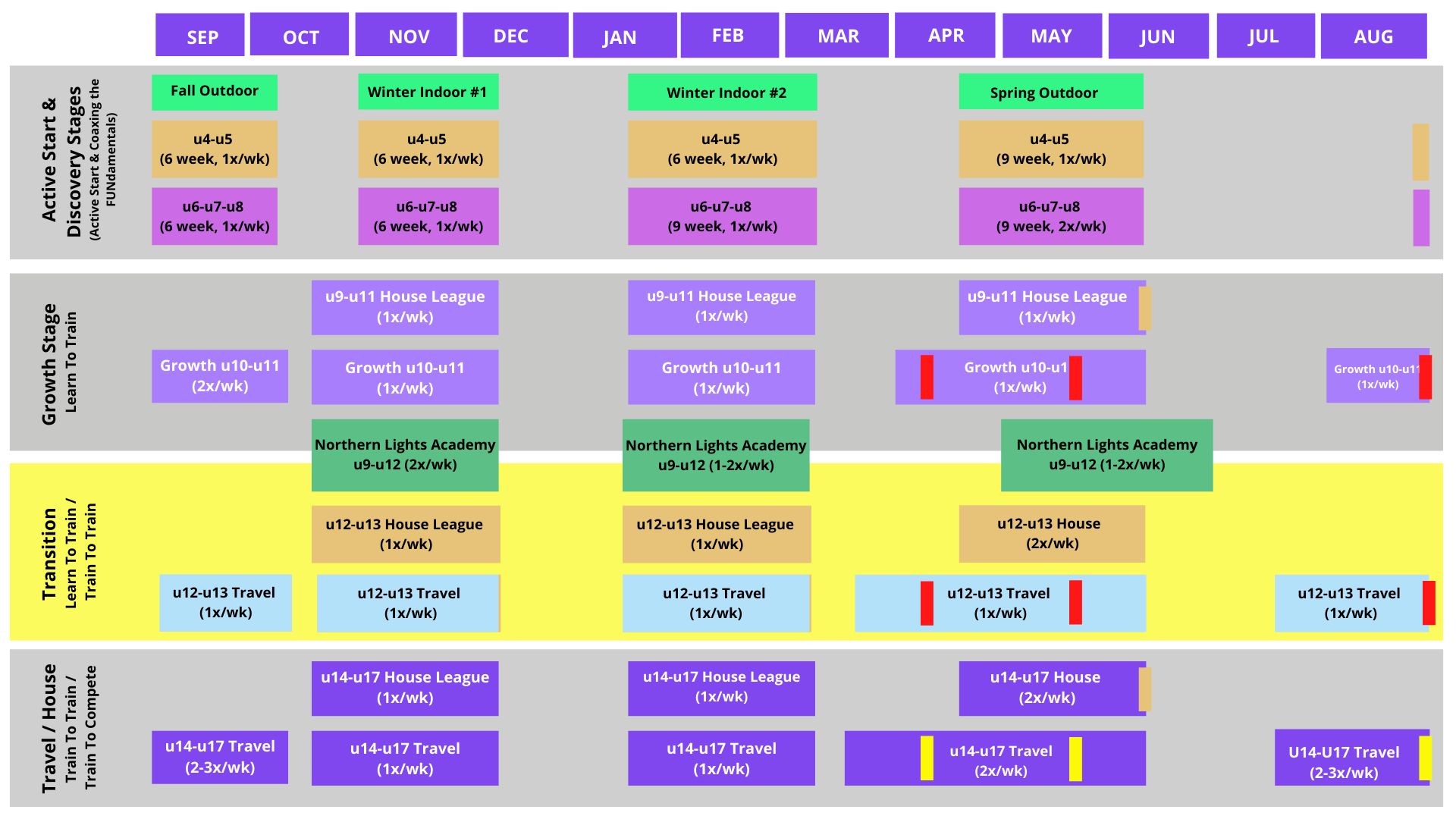